Jeffro gets served by a deer

This weekend saw the second attempt on my life by mother nature while riding my bike.

I was racing the 2nd annual Monster Cross race and about 15 minutes into lap 1 a doe, a deer, a female deer decided to run at me full steam and jump off the front of my bike sending me crashing to the ground. When I reviewed the video in slow motion, I could see that the deer essentially kicks me at the very last instant. I'm thinking it was a last second course correction with a kick in the face for what the deer percieved as a predator... Me! 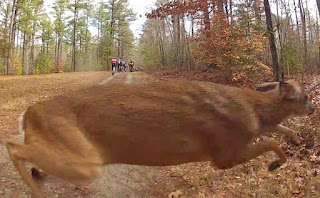 Lets call this exhibit A in the case of mother nature trying to stop Plassmido. As evidence I present the following video:


I'm really lucky, it's a good thing the deer didn't hit me in the body full on. I figure that deer was doing a good 30mph. Shoot, I didn't even have time to react. All I saw was fur, sky, ground. You can't make this stuff up!

Sometimes, the danger is less sinister... instead of taking you out, there is just a large trail hazard. Logs, dangerous branches, wet rocks, hidden holes, etc... Sometimes other animals leave presents on the trail for you.

Here I present exhibit B, video evidence of a crapy surprise:

Wasp to the Face!

About half a year ago, the 1st attempt on my life by mother nature was made. Not by a Bear, or the dreaded eastern Diamondback Rattlesnake, nope. I got stung between the eyes by a hornet or something... did not even stop riding my bike.After another 40 minutes or so... I noticed I could see my own cheek!

So after freaking out my wife upon my grand entrance home, after my ride, I found myself on a emergency care center bed getting an IV of cortical steroids and an injection of epinephrine. Soon I would find out from an allergist just how at risk I was. Yikes!

Here I present exhibit C, video proof of the aftermath:


My own worst enemy

Then again, sometimes I'm my own worst enemy...

Exhibit D is proof that I'm a hazard to myself sometimes!


Ouch! That ended up in a broken finger, with a really funny splint:

And in another incident I got a gnarly laceration after crashing on this rocky mountain bike ride:

Watch out boys and girls, mother earth is scorned and as we all know, hell has no wrath like that!﻿

For other race stories check out my race team blog: http://designphysicsracing.blogspot.com/
Posted by Jeff at 6:12 PM